THE MAN WHO IS TRAPPED ! 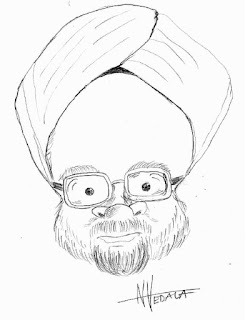 I ‘am not a congress man, I ‘am not a person who keeps lotus in palm, I ‘am not inclined to red even. Making it clear, I should say I ‘am least biased to any of the alive parties on strike right now. People believe in democracy and I love to be in the same subset. Politics is an unavoidable space in our lives and if our country has myriad people whether from the youth side or middle age,who keep themselves away from politics, then that is purely absurd. Logic won’t embrace when people do that in a country where sun rises and sets based on politics. If we started hating politics putting reasons like corruption, illegal manipulation and inner drama for power, everybody or at least a major pie of the population would be coming under the same shades. The shades of illegalities!  If moving away from the ballet box without putting the votes is the revenge people take , then I don’t think  even  god could find a difference between a fake politician and a citizen who makes fake like that.  Thrashing allegations and throwing hard stones might be a part of politics, Indian politics. But when I do see lot of posts and spreads through Social Medias against Mr.Manmohan Singh, I personally feel like those posts cross limits and don’t have life. We can protest, when that is our right but it doesn't mean anything could be done putting any odds over the web. We could not see Mr. Singh as just an astute economist, but he is a man who kicked start a bundle of reforms which made our country come out from the death bed.  He is the man who opened up the economy for getting rid of the stagnated stinking financial deficits. The deficits and the balance of payments had made Indian health the weakest. The controlled economy opening had lured many eyes abroad and the same was endorsing industry like Information Technology and banking.  India had travelled a long way from the year of 1991 to 2012 even though the financial state is not that stable right now (2012). Internal dirty reasons along with overwhelmed international vibrations had made huge jerk in Indian economy, not a man with turban on his head.


If Mr.Singh is the only reason for all slips and troubles India faces right now, then he should be the sole responsible for all the goodies listed below.
The goodies caused by 1991 financial reforms


Rural health mission
Right to Information acts
Returns from Globalization
Unique Identification Authority of India
National Rural Employment Guarantee Act
Right to Information, which brought out many corruption stories (which could be the jewel among all)
The Growth we had, etc

As I do respect him and I do have clear vision on what he did for the country , I have written this. (God promise-  I didn't get any monetary benefit from Mr.Manmohan -   He is not my Uncle J  )
He is a man who got trapped

February 27, 2013
What is Native Advertising? How efficient it is? Is it a new strong wave in Digital Marketing? Check out my post on Native Marketing on Web Analytics India Blog     Image Courtesy
180 comments
Read more

August 25, 2013
I don’t know how many of us actually listen to soul full Indian music- whether it is Hindustani or Carnatic. And there are zillion ears which get turned off by that kind of music. We are people who like songs, mainly filmy songs which are made  on the base of many ragas . But when we are put in front of a speaker set which plays that original raga in the born form, wrinkles at forehead. Right? I don’t know why and how that happens to many of us? Anyway I’m not here to do any research on that line.  But here is a man who has nothing to do with Indian culture or Indian music – Shankar Tucker. He has got only the first name which has something ‘Indian’ and that too he is not responsible.  So this man who is born and bought up in Massachusetts had a heart at the very younger age which got lured by Indian sounds. The man thus moved and rode a long way in the Indian classical routes making a strong base in both Hindustani and Carnatic braches. When one’s music could create a ser
25 comments
Read more

August 26, 2019
Yup! Another production that I was able to complete for Nabler
11 comments
Read more