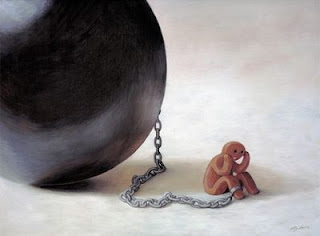 Genre: short story
For Nerrendhair toilette, the day was vital, a bit great. Foot steps were in new 'era'. When looked through the grills, the clock was moving fast from four hours, five minutes. Keeping a masked smile, he leaned over the wall. He was lazy to a count. He knew long way was waiting for him that day, the unknown pretty way. The routine play started. He felt that more eyes were staring at him. He too fought towards the 'look'.  He reached the room the bathing one. The first cup of water said 'bye' to the rest. He poured. While the water was patting him well, his eyes get blurred and the mind drew a picture over the wall in front of the man. On the wall he saw his kids, they fight and he shouted then 'hey'. Now the action flagged end. They smiled for him, which made the same in his face, the cutest curve on the globe.
"Where are the kids? Ask them to get ready".  His wife was told.  "You do the job, they all are getting ready" all of a sudden the reply was. He sang horribly then. White autumn flowers were slipping away from his flesh, he felt so. Sprayed water drops made the presence of jewels for him. Again and again and again, he shook his hairs to make the same event. Wall around him replied his 'woh', keeping a dozed tone echoes. For the door knock, he turned back, 'leena I'm coming, wait plz'. He comforted his wife then. That was keen good. But for the very second the scary image of his kids made him scream, and the bright knock on the door from outside made him pause the screaming waves. The sweats too hugged him. He shivered. Himself he managed the trauma. He was then pouring the whole bucket over him thus tearing the water beam from bucket.  After all, the same bucket was fired away. For the actions' each step he rhythm-ed. Teeth too were instrumental factors. Followed minutes let him come out of the bathing room. With a scrooge smile over his face he looked others.
At the dinning table it held items as he was a foodie. Plates holding food were waiting for his hands. Troubles were void in that frame. The man had enough and the siren from his inner was, a bit out of pitch.
He told many to his wife, even romance. And he was getting comfort replies from the other side. Grins he made and made others think that he is the only innocent and the most.
A wide lengthy hall appeared. He moved through it, when light strips trace him out of the lesser contrast. We heard sounds. Some one dragged the chair. Plates made their own charm.    Yup!   .  He left the dinning.
He seemed tensed and worried.  He was not satisfied with the framed guidelines that his dear ones had given him. And now the process reached the dressing ‘era’. He was fast enough. Body guarded well. His face always sparked.  When he looked back abruptly, dazzling flowers were dancing there and as a flash only they appeared. He smiled as a hearty acknowledgment for them, yeah for the flowers. For the past fourteen years he had been giving the same routine, for his daily office-trip. He was ready to say 'bye' but before that, another job. He kissed his dear wife then ‘bye’ followed. He didn't spare his ears to others, who were asking and telling some. He got into the car. Seeing his driver ready for a 'take off' with his hand on the gear lever, he asked. 'how you man?'
When asked that, he stared at the gear lever. His eyes were absorbing heavily the frame. Now the driver champ took the hand from the gear lever. He looked at toilette with rudeness clubbing sympathy. Toilette didn’t get any idea. "Disgusting" he said.
Suddenly his head was covered and couldn’t see anything. Some one was tying his hands and he was sure then that the gang is going to loot.  "Dial 100. I wont leave you people , Ajay common" . He yelled at his driver. To have the control over, he said many "driver take the hell"
Geared!
All around heard a terrific sound. Pin drop silence reigned. "Hmmm he is hanged”, with exhaustion the policeman said. Prison superintendent, person from the court and the superiors looked him. Seemed all said the same within the minds
the very next morning
At the jail warden's :-
Newspapers for the cops displayed
" Toilette hanged " with story " Nerrendhair toilette, who have given the capital punishment , was hanged yesterday for brutally killing his family". . . . . . . .
"an affair". . . . . . .
"lover". . . .
. . . "stabbed" . .
. . . . "raped and killed". . . . .
daughter . . . . . . . . . . .
Many words pumped out in that daily to cover up the story.
While groping inside the paper, one of the cop asked the police in saree,  "why he kissed u lady?. . . . . . strange? ". . . "hmmm special anything?" keeping the fun in his words,  he continued  "the man was murmuring and even bluffing a bit through out the day .  But you are lucky, u got one kiss," [with laughs he drove again into the newspaper]
"His psyche might leave him before his journey". This reply from the lady police made all other 'comics' stop.  They all kept the silence nicely. she just pat her cheek gently

February 27, 2013
What is Native Advertising? How efficient it is? Is it a new strong wave in Digital Marketing? Check out my post on Native Marketing on Web Analytics India Blog     Image Courtesy
180 comments
Read more

August 25, 2013
I don’t know how many of us actually listen to soul full Indian music- whether it is Hindustani or Carnatic. And there are zillion ears which get turned off by that kind of music. We are people who like songs, mainly filmy songs which are made  on the base of many ragas . But when we are put in front of a speaker set which plays that original raga in the born form, wrinkles at forehead. Right? I don’t know why and how that happens to many of us? Anyway I’m not here to do any research on that line.  But here is a man who has nothing to do with Indian culture or Indian music – Shankar Tucker. He has got only the first name which has something ‘Indian’ and that too he is not responsible.  So this man who is born and bought up in Massachusetts had a heart at the very younger age which got lured by Indian sounds. The man thus moved and rode a long way in the Indian classical routes making a strong base in both Hindustani and Carnatic braches. When one’s music could create a ser
25 comments
Read more

August 26, 2019
Yup! Another production that I was able to complete for Nabler
11 comments
Read more